Mineral determination of some range plants for grazing sheep in semi-arid areas of Chaharmahal & Bakhtiari province.

In order to comprehend magnesium, calcium, sodium, potassium, phosphorous, chloride, copper, iron, manganese and zinc content of dominant range plants (Agropyron  intermedium, Bromus tomentellus, Hordeum bulbosum, Cousinia bakhtiarica andScariolla orientalis) speciesin Chaharmahal and Bakhtiari province was investigated. Samples were taken from five ungrazed areas during three stages of plant growth including growing, blooming, and seedling between 1997-2000 years. Concentrations of all above ions were determined by standard methods. The result showed that maximum concentration of magnesium and calcium in Scariolla orientalis, which amounts of means were 2.8 and 11.6 gr/kg, respectively. The highest concentration of sodium and potassium were found in Bromus tomentellus and Hordeum   bulbosum respectively, with amount of 0.4 and 22.4 gr/kg. Maximum of phosphorus and chloride were observed in Hordeum   bulbosum with amounts of3.1 and 5.4 gr/kg, respectively. Highest of copper and iron were 9.5 and 368 mg/kg, which belonged to Cousinia bakhtiarica and Scariolla orientalis respectively. Speciesof Agropyron intermedium contained39.3 mg/kg manganese and concentration of zinc in Scariolla orientalis was 18.6 mg/kg, which the amounts were the highest between species. This study showed which phosphorous, sodium, copper and zinc were insufficient for sheep grazing requirement in all species, but magnesium was insufficient only in Agropyron intermediumand Bromus tomentellus, also calcium concentration was lower than  sheep requirement in Hordeum bulbosum. Therefore, mineral supplementation required to provide these mineral for grazing sheep and goats in spring and summer in range plants. Hence, potassium, chloride, iron and manganese provide the requirement of grazing sheep and goats, but chloride was over loaded and it was in the level of toxicity and unsafe for sheep and goats. Also different phenological stage showed that assessment factors were significantly different at growing, blooming and seedling stage of species. These factors must be considered when sheep and goats are grazing on natural pasture. 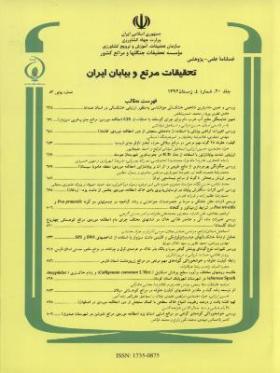